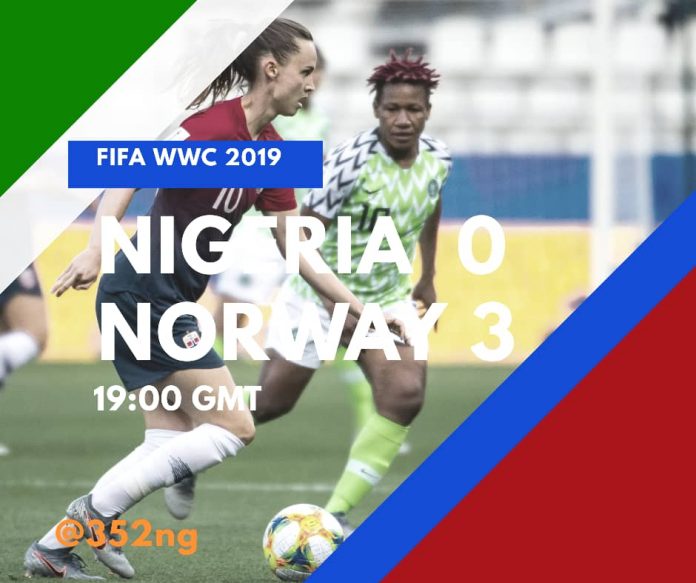 Day two of the FIFA Women’s World cup saw a lot of ups and downs especially for African teams. The first goal for an African team was scored but ultimately the continent suffered two defeats in two games as well. Germany, Spain and Norway made their intentions clear on this match day.

Germany vs China opened proceedings with a keenly contested game which saw Germany dominate possession but fail to cause the Steel Roses any serious problems. It was in fact China who had the best chances in the half with striker Li Yang failing to convert what was essentially an open goal, delaying until Sara Doorsoun was able to get a block in.

Germany were next to come close with an innocuous cross from full back Carolin Simon coming of the cross bar. That was as close as the Germans came to scoring in the first half despite having over 60% of possession and 6 shots on goal. Li Yang again threatened the Germans, this time her curling effort when through on goal struck the upright and bounced back into the penalty area. In the ensuing chaos, China came close but almost inexplicably failed to get the ball over the line. 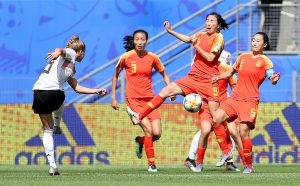 They were made to rue those missed chances as midway through the second half, Germany scored through Guilia Gwinn as she met a partial clearance with a ferocious volley that was beyond Peng Shimeng in goal before she even saw it.
Germany escaped with the most German win ever and will be happy with that start given the complexity of the group.

All is not lost for China however. They showed good quality most times and will be hoping they can find better form in front of goal when they face South Africa in their next group game. 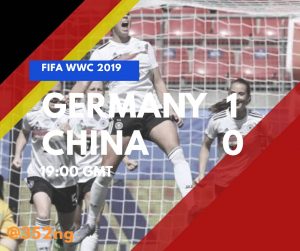 Africa’s best player, Thembi Kgatlana, took only 24 minutes to register Africa’s first goal at the World Cup with a stinging effort that left Spain goalie Sandra Paños with no chance. South Africa held their own for most of the first half, barely allowing La Roja any good chances at goal.

They began the second half in a like manner, but their fitness levels seemed to fail them as Spain continued to pour forward wave after wave. South Africa eventually cracked under pressure in with just over 20 minutes of the game to go. Captain Janine Van Wyk was judged to have handled the ball in the penalty area and Jenni Hermoso dispatched the resulting penalty (the first of the tournament) sending the goalkeeper the wrong way.

Hermoso got the chance to give Spain the lead from the spot again when Nothando Vilakazi was penalised for a foul in the penalty area upon VAR review. Vilakazi was given her marching orders (the first of the tournament) for her second bookable offence and she made her way to the tunnel in tears, Hermoso converted again from the spot to give Spain the lead. Upon inspection, Vilakazi’s challenge looked accidental but was robust nonetheless and the referee had no option but to point to the spot. 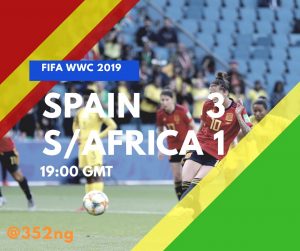 Spain wrapped up the win as Banyana Banyana tired both physically and mentally. Lucia Garcia latched on to a magnificent through ball before rounding the goalkeeper and slotting into an empty net. Spain have a very good platform to seek qualification from the group now and they face Germany in their next fixture while South Africa will be hoping to pick up the pieces against China.

Nigerian midfielder Evelyn Nwabuoku made a tongue in cheek comment about the Super Falcons being different from the Banyana Banyana when asked about Nigeria’s chances against the Scandanavian country who had defeated South Africa in a pre tournament friendly. Her comments didn’t bode well for the Falcons eventually as they met with the same fate as their contemporaries from down south albeit by a lower scoreline.

Nigeria and Norway started the game with zero regard for control and went for each other’s throats early on before Guro Reiten gave Norway the lead via a deflection off Onome Ebi’s arm in the 17th minute. 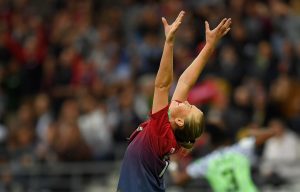 The gung-ho style of play from both teams continued and Nigeria flattered to deceive at times. Going close and carving out opportunities but still lacked the final pass, or shot to make the opening count.

They were made to regret their lack of composure upfront as Lisa-Marie Utland doubled Norway’s lead with a blazing strike which went in off the underside of the post.

In the blink of an eye, two for Norway became three as Osinachi Ohale inadvertently turned the ball into her own net. 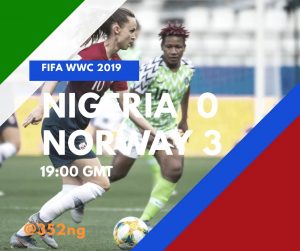 The game stayed that way until the end with few moments of importance in the second half to hand Nigeria a start they would have hoped to avoid.

Norway face France next and will be hoping for another exceptional performance from Caroline Graham-Hansen who was a constant source of heartache to the Nigerian defense. Completing 9 take ons, creating 3 chances and assisting the opening goal. It was her night without doubt and the Super Falcons would be glad to see the back of her.

Nigeria face South Korea in their next game, and considering South Korea are the only reason Nigeria isn’t propping up the table, they will be hopeful they can get a result from the game so fans of Nigerian football can once again get out their tournament calculators to see what possible permutations and combinations would see the Super Falcons through to the next round.