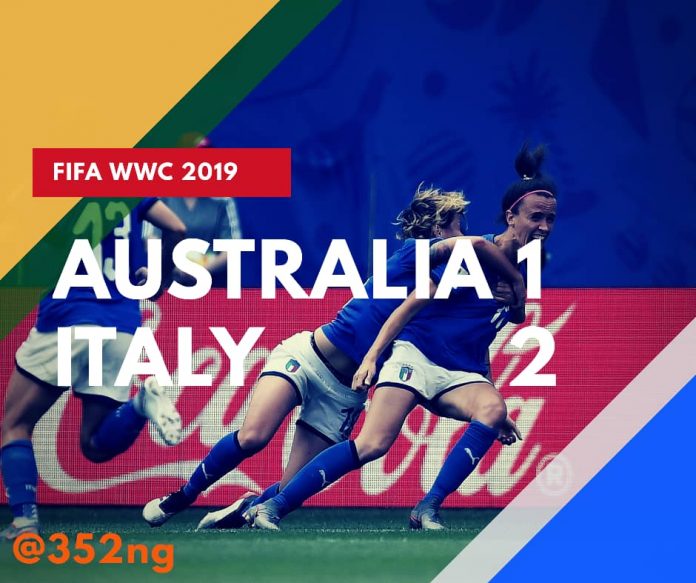 The third day of the FIFA women’s World Cup brought with it the first real upset of the tournament as Italy snatched all three points at the death against pre-tournament favourites Australia.

Although Australia were expected to put on a strong show in the group and the tournament as a whole, they got off to the worst possible start as they surrendered all three points to Italy with less than 10 seconds of play to go. The Matildas got fair warning of how dangerous the Italians, especially eventual game winner Barbara Bonnaesa was when they were saved by the VAR system after Bonnaesa had put the ball in the back of the net. After a review, she was found to be offside and the goal was chalked off.

Australia were the team to draw first blood after Italian Captain, Sara Gama brought down Aussie Captain Samantha Kerr in the penalty box. The latter stepped up and missed the penalty, but scored the rebound to put her team 1-0 up after 22 minutes. 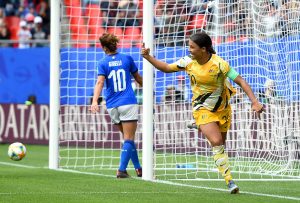 The second half as more open than the first as Italy chased an equalizer, and they found one when Bonnasea pounced on an error by Clare Polkinghorne to finish with aplomb. Le Azzurre thought they had got the winner when Daniela Sabatino tuned in the rebound of her effort that came off the post. The goal was again chalked off following a VAR review and The Matildas were spared, if only for a few minutes.

Five minutes into stoppage time, Italy got the winning goal they so craved as a floated cross into the area from a free-kick found Bonnasea who made an unerring finish to give Italy all three points in their first game in a tight Group C. Australia walked away with their tails between their legs and have an even tougher game against Brazil to look forward to. Italy could secure qualification for the next phase with a win over Jamaica in their next game. 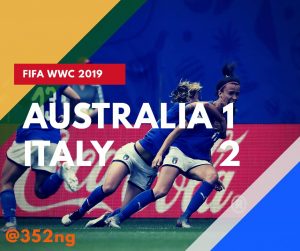 Brazil entered the game against Jamaica as overwhelming favourites and despite not being able to field their captain and legend Marta, they still lived up to their tag. They dominated the reggae girls who were willing to sit back and hit the Canarinhas on the counter attack. The first real chance of the game fell to Brazil’s Debinha but Jamaica’s Sydney Schneider made the first of many saves in the game.

Schneider was eventually beaten when Cristiane met Andressa Alves’ cross with a header into the corner of the net, giving Schneider no chance. Khadija Shaw had Jamaica’s best effort on goal, testing Barbara in the Brazilian goal with a stinging drive. Barbara who was playing in her first ever World Cup match despite making the squad on two other occasions, was more than equal to the task.

Schneider again came to the rescue of the reggae girls by denying Cristiane from the spot after Brazil had been awarded a penalty for handball. Cristiane would have her revenge in the second period. Ghosting at the far post to score an easy tap-in from Andressa Alves’ square ball. She eventually sealed the win and recorded the first hat-trick of the 2019 Women’s World cup when she scored a sumptuous free-kick that went in off the underside of the cross bar before crossing the goal line. 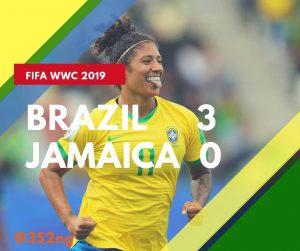 England came out on top of the Home Nations Derby as they overcame a plucky Scotland side who were in the game until the final kick of the ball. England took the lead through Nikita Parris via a penalty. After a VAR review showed Scotland’s Nicola Doherty had handled the ball in the box. Parris dispatched the penalty into the top corner and England were on their way. 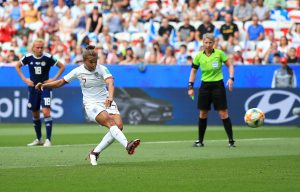 The Lionesses continued to pile the pressure on Scotland and were rewarded when Ellen White pounced on a lose ball in the area to guide the ball past Lee Alexander in the Scottish goal. Scotland upped their game in the second half as they chased the game and Claire Emslie forced a good save out of Karen Bardsley with a low drive. They eventually pulled a goal back through Emslie following a mistake from England Captain Steph Houghton. 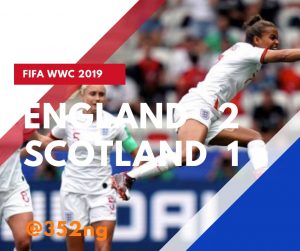 The game ended that way, with England hanging on to all three points ahead of their second round game against Argentina. Scotland will be up against Asian champions Japan in their next game, but their second half performance will give them confidence going into the game.