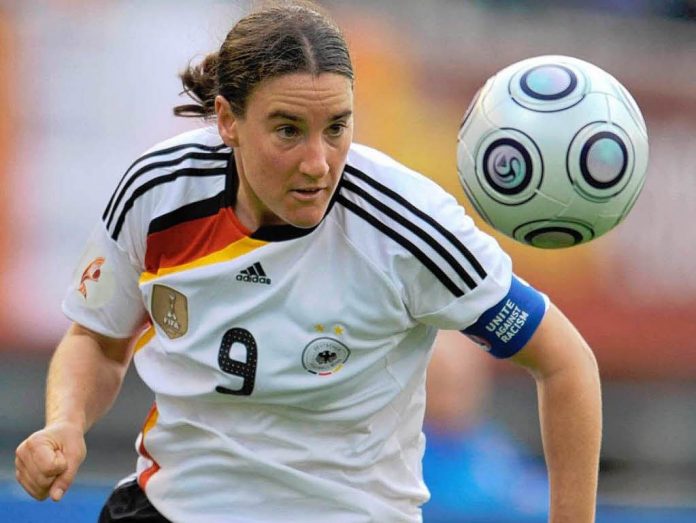 Football can be a very emotional sport. When you play or indeed watch the sport, the memories of these emotions can last a lifetime. We remember the last-ditch tackle, clearance or save that rescued the game, the eye-catching dribble, but most of all the goal. Boy, do we love goals.

No other emotion can rival seeing the ball in the back of the net, whether for or against your team. As such we tend to remember the strikers usually responsible for this emotion. These guys in particular scored a ton at the Women’s World Cup, and they all wore the traditional striker’s number: the number 9. 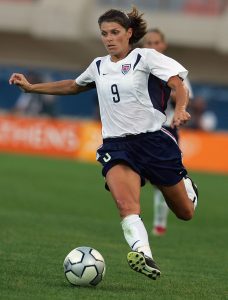 Look away now fans of Nigerian football. The name Mia Hamm strikes fear in the hearts of fans old enough to remember her utter demolition of the Super Falcons the two times she came across them at the World Cup. Few can forget Mia Hamm ripping apart the Super Falcons at the 1999 World Cup as she hammered 2 goals and provided another assist as USA ran out 7-1 winners against the African Champions.

What is more amazing perhaps is the fact that at that point she had already scored 110 international goals before then.

She repeated the feat when they met four years later on home soil, again helping the team to a 5-0 win. She is known as one of the greatest players in Women’s World Cup history, and rightfully so, she was a vital part of the USA teams that won 2 World Cups and finished third once as well. With 8 goals at the World Cup in total and 2 winners’ medals, she was amongst the most formidable forwards of her generation. 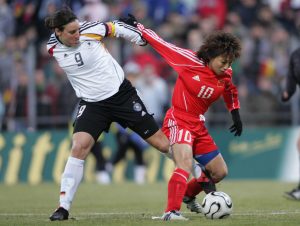 Sun Wei played at four World Cups for China, but she will be remembered most for her performances at the 1999 edition where she scored 7 times as China narrowly lost on penalties in the final. Sun Wen is till date China’s record goalscorer and is considered the best to ever do it for the country.

The entrancing forward made her debut for the Steel roses at 17 and represented them at the 1991 and 1995 World Cups before her incredible blitz in 1999 which saw her score a hat-trick against Ghana and a brace against Australia in the group stages, as well as a brace against defending champions Norway in the semi-finals as China won 5-0. Even though she was met with heartbreak in the finals, she will forever be remembered for her legendary displays in that tournament which earned her the silver boot and golden ball. 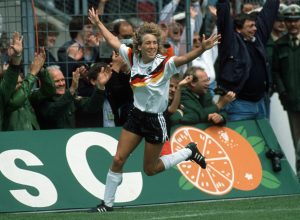 Heidi Mohr was one of the pioneer superstars of Women’s football and one of the best to ever play the game. She was voted as the European player of the century in 1999. She finished her career with 83 goals in 108 appearances for the German National team, winning three UEFA Women’s Championships in the process.

Her finest moment on the world stage came at the inaugural Women’s World Cup where she amassed seven goals to finish as the second highest scorer in the tournament. She scored in all but one game. Finding the back of the net against Nigeria and Chinese Taipei (twice each) and Italy in the group stage before scoring the winner against Denmark in the Quarter final. She scored against USA in the semi-final, but her goal couldn’t save them from an eventual 5-2 loss. 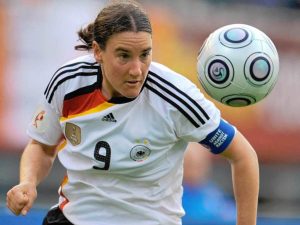 Mohr ran so that Prinz could run, and run she did. She eventually broke Mohr’s record with Die Nationelf, as she recorded 128 goals for the senior National team. She also went one better than her counterpart when she won the golden boot at the 2003 World Cup in the USA, also  with seven goals. In the process, she won the Golden ball as the player of the tournament and secured her first of 2 World Cup triumphs.

In 2007, she guided Germany to her second World Cup title with five goals including the opening goal in the final against Brazil, lifting the trophy as Captain in Beijing. It was also at that tournament that she became the highest scoring German in World Cup history. She retired from international duty in 2011 with 14 World Cup goals, a veteran of five tournaments and arguably the greatest ‘number 9’ ever in World Cup history.