Following the 4-0 defeat inflicted on the Indomitable lions of Cameroon by the Super Eagles of Nigeria on Friday evening in Uyo, Nigeria. Here are five things learnt.

It has been proven and said over time, that the starting XI of a team alone is not enough to win games or even trophies. Winning teams/sides over the years, when x-rayed; do have players capable of winning points/games single-handedly on the bench. That was the case of the Eagles on Friday evening. When Odion Ighalo and Victor Moses were taken off, Kelechi Ihenacho and Ahmed Musa were the replacements. Both of them are capable starters on any given day and they lived up to the billing with cameo performances. Ihenacho managed to grab a goal. This shows that the Eagles have the required personnel to call on should games be heading for a deadlock. 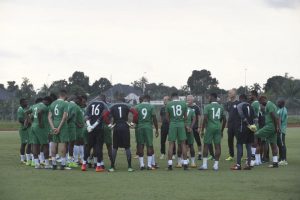 SAFE HANDS BETWEEN THE STICKS

Ever since Wolverhampton Wanderers and Eagles first choice goalkeeper, Carl Ikeme was diagnosed with leukemia, it had sparked a mini crisis within the Eagles camp, as to finding an adequate cover in his stead. In the 2-0 defeat by South Africa in Uyo, Daniel Akpeyi, in goal, was liable in part for the shock defeat. Many Nigerians did not take it lightly with the young goalie, as they took to the media to voice their displeasure over his performance. That was the same apprehension football fans faced going into the game against the Lions.

When Ikechukwu Ezenwa of F.C Ifeanyi Ubah manned the goal post for the Eagles, Nigerians did not know what to expect. As the game wore on, the swagger, bravery and confidence he brought to bear on the backline was second to none, some folks likened him to his namesake and former Eagles’ number one, Ike Shorunmu. In the era where the role of the goalkeeper has evolved from orthodox goalkeeping to becoming the sweeper keeper and one who initiates attack, Ezenwa showed he possessed these qualities too. He was very comfortable with the ball at his feet and his ball distribution was efficient. Judging from his performance in this game, I think the “crisis” surrounding the goalkeeping situation has been put to rest. 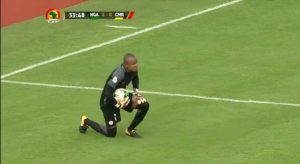 Despite not being one to judge, the superb performance of the Eagles nonetheless, I find it hard to believe that Elderson Echejile is the best left back the country can produce. As usual, he was the weak link in a defence that performed wonderfully. Though he did put in some good tackles occasionally, his first touch and positional awareness let him down many times, this had Leon Balogun drifting to the left hand side on many occasions to cover for him. It is time for the technical crew to look for an upgrade on Echejile, as the spare left-back, Ola Aina of Chelsea FC is not yet proven.

It really has to be said; the partnership of William Troost-Ekong and Leon Balogun was psychic to say the least. They hardly put a foot wrong all game long, as they had all the answers to posers and trickery Vincent Aboubakar and Christian Bassogog had to throw at them. Balogun put in a top drawer performance on the day with a high level of committed defending and strong tackles. One particular sliding tackle on a Cameroonian attacker towards the corner flag was cheered by the ecstatic Uyo fans. With Kenneth Omeruo, on the bench, we have decent centre-backs on show. 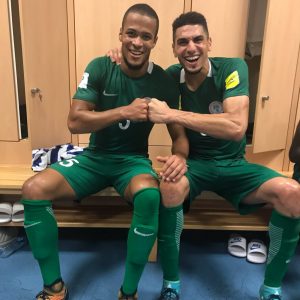 In Africa and indeed Nigeria, almost all products (consumable or not) carry a similar tag, “Made in China”. Well, that was also the case on the pitch on Friday. Ever since footballers started travelling the silk road to the football backwater Chinese league, they have come in for truckloads of criticisms bordering on hunger for the game and also a seemingly end to their international careers. On Friday, the performance of Eagles’ China based duo (Obi Mikel and Odion Ighalo) put a big question mark on the criticisms leveled against them.

They showed great understanding for the Eagles’ first two goals. Ighalo proved to be a nuisance to the Lions backline, committing them into making bookable offences, while Obi Mikel, with his trademark long balls, ran the Lions midfield into the ground. If the duo could consign the reigning African champions to defeat with “made in China “ goals, who can then say that Chinese products are not original? 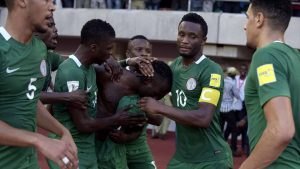 I wish the Eagles good luck on the road against the Lions. A result there would see us land in Russia, with games to spare. Go Eagles!!!!!!