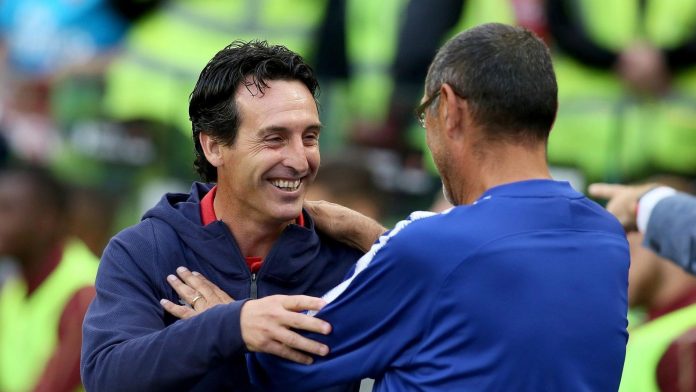 One of the fiercest London derbies is here again; Emery’s Arsenal takes on Sarri’s Chelsea at the bridge. Both managers are still trying to find their feet and instil their Ideas on their respective clubs. The opening game of the season has swayed in different fortunes for the new managers with Chelsea picking up maximum points against Huddersfield while the gunners dropped all 3points to the ever brilliant Citizens.

Another big test for Unai Emery, one can say that the early season fixtures have been harsh on the gunners with them having to play two of the top six teams in succession. Arsenal has not gotten the kind of start that they wanted for the new season and will like to pick up points against Chelsea to kick-start their season.

Chelsea, on the other hand, has gone off to a flying start, trashing Huddersfield town 3-0 in their opening game despite not playing at their best. They will want to keep their momentum by claiming all 3points if they are to put last season’s debacle away and mount a title challenge or in the least stay in the top 4.

Since the turn of the Abramovich era, Chelsea has had the upper hand in this fixture. In the last 5 games between them, Chelsea has won two of those games with arsenal winning one and the others ending in a stalemate. Arsenal has also not managed to beat Chelsea at the bridge in their last 5 visits, in fact, you need to go as far back as the 2011-2012 season when Robin Van Persie’s phenomenal hattrick helped them to a 3-5 victory against Chelsea at the bridge.

It is without any doubt that Hazard is Chelsea’s most potent weapon and when given the freedom to, he can cause a lot of hazards for the opposition team. His intelligence, quick feet and his ability to operate in tight spaces make him a problem for almost any defender to handle. Despite not starting the opening game, it is without a doubt that Hazard will start this game and he is someone the gunners will have to look out for.

Auba is one of the best strikers in the world and has been a good acquisition for arsenal scoring 10 goals in his last 13 premier league appearances prior to the defeat against City. He is very quick on the ball and is a very good finisher if Arsenal can find the runs of Aubameyang. This may cause a lot of problems for Chelsea. This season seems to be a very big one for Auba as many have dubbed him as the favourite for the golden boot gong.

Chelsea will be without Cesc Fabregas who picked up a knock to his knee while Arsenal has Ainsley Maitland-Niles, Sead Kolasinac. Carl Jenkinson and Laurent Koscielny ruled out for the game.  Nacho Monreal has recovered from injury and is back in full training which is a big boost for the gunners.